To share your memory on the wall of Richard Young, sign in using one of the following options:

Dick was born in Onondaga Hill and later moved to the Phoenix, NY area. He was the son of the late Roy and Mildred (Drumma) Young. His siblings Janet, John, Roy, James, Joan, Beverly, Rosemary, Shirley, Patricia, Marilyn, Ruth, and his grandson Jesse Carpenter all predeceased him.

He is survived by his beloved wife of 47 years Beverly J. (Rowe) Young and his five step-children Gail (Michael) Hammond, Lynn (Janet) Moyer, Jodie Moyer of Tampa, Florida, Jamie (Mary) Moyer of Tampa, Florida and Alan (Sandra) Moyer, 7 grandchildren, 11 great-grandchildren and siblings Jean Cook, Barbara (Marvin) Johnson of Palmetto, Florida and Bud (Judy) Young.
Dick attended Phoenix Central School and served in the Navy aboard the USS Laffey from 1962 to 1966. He worked for Atlantic Richfield at Three Rivers, NY and later as a heavy equipment operator for Ballard Construction of Syracuse, NY.

Dick’s passion was his family, he was a devoted husband, stepfather, grandfather, great-grandfather, and a friend to everyone that he met. He loved spending time with them and sharing memories of growing up in a family of 15 brothers and sisters. Dick was an avid hunter, fisherman and enjoyed working around his house and yard having an amazing green thumb and so proud to show his many colorful Zinnia flowers. Dick along with his wife Bev enjoyed attending the annual USS Laffey reunions and staying connected with his Navy buddies.

The family wishes to express their heartfelt gratitude to the doctors, nurses and staff at the Syracuse VA Medical Center, The Hearth at Greenpoint, CNY Hospice and Changing Seasons Home Care.

A private funeral service will be held for immediate family.
Read Less

To send flowers to the family or plant a tree in memory of Richard Young, please visit our Heartfelt Sympathies Store.

Receive notifications about information and event scheduling for Richard

We encourage you to share your most beloved memories of Richard here, so that the family and other loved ones can always see it. You can upload cherished photographs, or share your favorite stories, and can even comment on those shared by others. 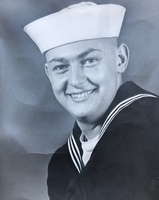