To share your memory on the wall of Stephen Adams, sign in using one of the following options:

The gesture that can change the world

Antoinette Ranieri Adams. He grew up in Baldwinsville, NY

Antoinette Ranieri Adams. He grew up in Baldwinsville, NY

He was predeceased by his parents and his brother, John

P. Adams, Jr. and also his by his “second mother”, Maria

He was a devoted and loving father and caring friend. He

had a consuming passion for cars, and worked in the auto

industry throughout his life. He was extremely knowledgeable

and turned a mead wrench. His other vocation was cat lover.

His intellectual curiosity was boundless and he was interested

in all things scientific, especially weather, space and the natural

world. He loved Star Trek and science fiction. He was an avid

behind his eyelids. He liked watching This Week with George

Stephanopoulos, which he referred to as “the weekly argument”.

and we loved him for it all. He made tremendously good coffee

and took care of us.

He is survived by his wife and friend, Melissa Colbert Adams and

his pride and joy, his son Avery John Adams both of Phoenix, NY.

Joanne Colbert of Phoenix. He leaves behind cousins Peter,

Michael, Joseph and John Ranieri and their families. He is

In lieu of flowers, if you wish to honor Steve, please consider

a donation to Spay and Neuter of Syracuse or Helping Hounds.

Also, maybe go to the Syracuse Nationals and live it up.

“Why did the Italians lose the war? Because they used rigatoni

instead of shells”
Read Less

To plant a memorial tree in honor of Stephen Adams, please visit our Heartfelt Sympathies Store.

There are no events scheduled. You can still show your support by sending flowers directly to the family, or planting a memorial tree in memory of Stephen Adams.
Plant a Tree

We encourage you to share your most beloved memories of Stephen here, so that the family and other loved ones can always see it. You can upload cherished photographs, or share your favorite stories, and can even comment on those shared by others.

Plant a Tree in Memory of Stephen
Plant a tree 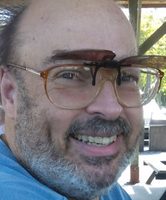