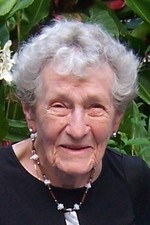 Selma M. “Skip” Rowland passed away at her home on Monday morning. She was born in Little Falls, NY to William and Leila (Dinehardt) Cramer on November 27, 1922. Selma received a Bachelor’s Degree from Oswego State College (now SUNY Oswego) and went on to obtain her Master’s Degree from Syracuse University. She worked as a teacher and librarian at the Cherry St. School in Phoenix then took the same position at Pennellville School. Selma retired from Phoenix Central Schools in 1976, joining the NYS and Oswego County Retired Teachers Associations. She was a congregant of St. Stephen’s Catholic Church in Phoenix and was a member of the Altar Rosary Society as well as the Society of Parish Historians. Selma was a longtime member of Phoenix Public Library where she served on the board as Treasurer and the North Country Library System as a Trustee. She was predeceased by her brother, Bill Cramer in 1973; and husband, John Rowland 1987.

She is survived by her children, John W. (Joyce) Rowland, Kathryn Dunn, and Carla Rowland; seven grandchildren; and several great-grandchildren, nieces and nephews.

Due to social distancing concerns a private Mass of Christian Burial will be held on Friday at St. Stephen’s Catholic Church in Phoenix, with Rev. Joseph Scardella officiating. Internment will take place in St. Mary’s Cemetery, Fulton.

In lieu of flowers, contributions may be made to the Phoenix Public Library, 34 Elm St., Phoenix, NY 13135.