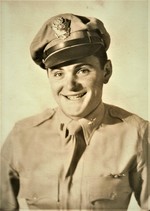 Marshall F. Corey, 97, of Baldwinsville, passed away on Thursday. He was born on May 11, 1923 to Roland and Nora (Murphy) Corey, in Phoenix, NY. Marshall graduated from Phoenix Central High School. He became a machinist by trade and had a long and successful career as a tool and die operator. Marshall paused his career to join the US Army Air Corp during WWII, where he served as a Navigator on a B-24 Liberator in the Western Pacific Theater. Marshall was a man of dedicated faith and a caring, loving father, husband and friend. He was an avid outdoorsman, and gave his time and dedication to those in his life he considered family.

As per Marshall’s wishes there will be no calling hours. A Mass of Christian Burial will be held at St. Mary’s of the Assumption, Baldwinsville, NY. A date has yet to be determined. Please visit the Allanson-Glanville-Tappan website for updated information.