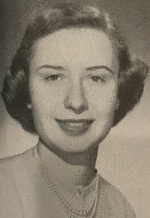 Marlette A. Tappan, 83, of Laguna Niguel, CA, passed away peacefully after an eight year battle with Alzheimer’s Dementia. She was born in Syracuse, NY on May 6, 1936 to Clifford H. and Ardus G. (Kratzer) Tappan. Marlette graduated from Baldwinsville Academy and Central School in 1954 and was awarded a scholarship to Powelson Business Institute. She married Robert “Bucky” Sickler in 1957, a year later Stephen was born. Bucky and Marlette were living in University Housing while he finished classes at the time. She considered these “the best years” of her life. Upon his graduation they moved to Liverpool, NY where Pamela was born in 1961. Bucky’s work moved them to Millis, MA, where Susan was born, in 1964. In 1967 they moved to California where they remained. In 1973 the marriage ended and Marlette became a Medical Transcriber at her local hospital. There she was well liked and often voted employee of the month as she broke records with her typing speed. It was a career she truly loved. In 1974 she married James Frye and after 25 happy years, he passed away. Marlette retired in 2001 at age 65. A year later she married Donald Hamer, who passed away in 2014. She was a very loving, loyal, and devoted wife, mother, and friend. Like her name, Marlette was unique and her quick wit will be sorely missed, until we meet again. She is predeceased by her parents; beloved brother, Gordon C. Tappan, and three spouses.