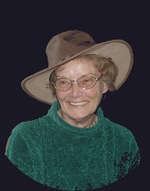 Marie F. Scott, 99, of West Siloam Springs, Oklahoma passed peacefully on December 16, 2020 following a brief illness. She was born in Glennie, MI on September 16, 1921 to her late parents, Margaret (Montney) Webster and Joseph Webster. Marie was one of ten children.

Marie was a housewife, baby sitting several years for a family friend, then for her grandson Terry Houghtaling. After the children were grown, she worked as a nurse's aid at a local hospital. Marie was a long time active member of the Seventh Day Adventist Church, in Fulton NY.

Shortly after Jack's retirement in 1973, they moved to Wytheville, VA, where worked in a nursing home and was again active in the local Seventh Day Adventist church. They lived in Wytheville until Jack's health started to fail, at which point they returned to the Phoenix, NY area.She was preceded by her husband of 58 years, John B Scott Jr. (Jack) on January 16, 2000.

A memorial service will be held at the Roosevelt Seventh Day Adventist church, 4456 State Route 49, Fulton NY 13069. Memorial date and time will be announced by the church.