To share your memory on the wall of Leonard Cooper, sign in using one of the following options:

Leonard Cooper, Sr.. He attended primary and secondary school in North Syracuse and Central Square, graduating from Sandy Creek High School in 1949. He

received his Bachelor of Science Degree from SUNY

Oswego in 1953, and his Master’s Degree from SUNY

Oswego in 1958. Leonard proudly served in the United

States Army prior to marrying his wife Carol in 1955. He

Leonard worked as a teacher in Brownville Schools and

in Baldwinsville Central Schools. He was quickly pro

moted to School Administration in Baldwinsville, and

served in that district for 39 years. Leonard helped

education programs, notably, he was the first Director

of Personnel at Baldwinsville Schools.

After his retirement in 1989, Leonard continued his

dedication to the education system by acting as a NYS

in their placement for academic success. In the years

following, he held numerous state office titles within the

member of the First Congregational, UCC in Phoenix,

Leonard served as Chairman and member on the Board

of Trustees, and was integrally involved with Sunday

As a lifelong sports enthusiast and avid golfer, Leonard

acted as President and founder of the Board of Directors

Furthermore, for 27 years, Leonard was a passionate

enjoyed most watching his children and grandchildren

participate in their various activities, both during and

after school age years. He took pride in achievements

of those he loved and relished celebrating their successes.

In lieu of flowers, contributions can be made to the First

Arrangements in care of: Allanson-Glanville-Tappan

To send flowers to the family or plant a tree in memory of Leonard Cooper, please visit our Heartfelt Sympathies Store.

Receive notifications about information and event scheduling for Leonard

There are no events scheduled. You can still show your support by sending flowers directly to the family, or planting a memorial tree in memory of Leonard Cooper.
Visit the Heartfelt Sympathies Store

We encourage you to share your most beloved memories of Leonard here, so that the family and other loved ones can always see it. You can upload cherished photographs, or share your favorite stories, and can even comment on those shared by others. 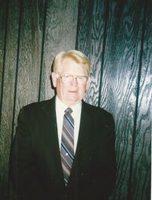