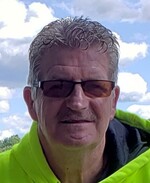 Kevin “Buzzard” Socie , 60, of Fulton NY, went home to be with the Lord on Sunday, November 29th, 2020, after a brief battle with cancer. He passed away surrounded by his family, listening to his favorite songs. In his earlier years, he enjoyed coaching his children in baseball and football. He was an incredible father who became an incredible grandfather. Kevin loved spending time with his grandchildren. He also enjoyed four-wheeling, dirt bikes and kayaking. Kevin spent much of his free time playing his PS4, often mentoring young adults while playing. Anyone who knew him, knew Kevin was a diehard Dallas Cowboys fan. He was very passionate about everything he believed in, especially his faith. He lived life his way, and without regret. His famous last words were "Do it until someone tells you no", and he did!
Kevin was predeceased by his father Kenneth Socie Sr and brother Kenneth Socie Jr.

Please share any memories of Kevin in the guest book below.