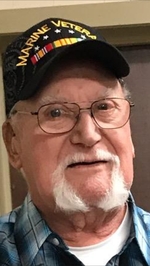 John R. Stoltz, 87, of Fulton passed away unexpectedly at his home on Tuesday. He served in the US Marine Corp and worked for Northern Aggregates as a truck driver until his retirement. John is predeceased by his daughter, Gayle Y. Stoltz; brother, Michael Winahradski; and step-daughter Denise Dixon.

A Graveside Service will be held in the spring at Roosevelt Cemetery, Pennelville, NY.