To share your memory on the wall of James Charles, sign in using one of the following options:


He was born in Syracuse.A man with boundless energy, he approached the end of life with bravery and humor, in the same way he lived for almost 86 years.


After graduating from high school in Clayton, NY, (class of 1950), Jim entered the US Air Force and served proudly during the Korean War era, stationed overseas in England, and honorably discharged in 1955.


Following graduation from St. Lawrence University, he worked for Firestone Tires as a sales manager and attended Syracuse University for graduate school before becoming a career-high school math teacher in Phoenix and then Cazenovia, NY.


His encore career included a return to retail management for Fay’s Drugs and teaching mathematics at Butler Correctional Facility.


He loved sailing and boating.


His lifelong passion for being on the water began while growing up on the Saint Lawrence Seaway.


He loved working in his wood shop, reading, writing and watching football on TV.


He dearly loved and cherished his family and many wonderful friends.


He was predeceased by his parents, Robert and Ruth (nee Fowler)


Calling hour will be on Monday June 10, from 10 to 11 a.m. at the First Congregational United Church of Christ, 43 Bridge St., Phoenix, followed immediately by an 11 a.m. memorial service and celebration of his life.


In lieu of flowers, donations to his memory may be made to the First Congregational United Church of Christ, 43 Bridge St., Phoenix, NY, 13135.

To send flowers to the family or plant a tree in memory of James Charles, please visit our Heartfelt Sympathies Store.

Receive notifications about information and event scheduling for James

There are no events scheduled. You can still show your support by sending flowers directly to the family, or planting a memorial tree in memory of James Charles.
Visit the Heartfelt Sympathies Store

We encourage you to share your most beloved memories of James here, so that the family and other loved ones can always see it. You can upload cherished photographs, or share your favorite stories, and can even comment on those shared by others. 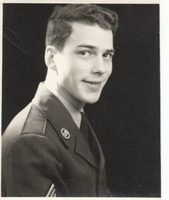