To share your memory on the wall of Donald Pittsley, sign in using one of the following options:

The gesture that can change the world

Print
Donald E. “Don” Pittsley, Sr., 86, of Granby, (Fulton) passed away peacefully at his home, with his loving family beside him on Saturday January 2, 2016.

He was born in Fulton to his late parents, Lois (Abbott) and Theodore

Donald E. “Don” Pittsley, Sr., 86, of Granby, (Fulton) passed away peacefully at his home, with his loving family beside him on Saturday January 2, 2016.

He was born in Fulton to his late parents, Lois (Abbott) and Theodore


Don was a carpenter with the Carpenter’s Union Local 747, Syracuse; a

and the Men’s Association; honorary member of the Cody Fire Dept., Granby;

an avid camper; in his retirement years, he worked diligently at the

preparing for the new large section of grave lots, and other tasks.


Predeceased by his loving wife of 59 years, Molly A. (Goman) Pittsley on

loving and loved by all. He will be missed.

Funeral services will be on Thursday January 7, at 10 a.m. in the funeral

There are no events scheduled. You can still show your support by sending flowers directly to the family, or planting a memorial tree in memory of Donald "Don" Pittsley Sr..
Plant a Tree

We encourage you to share your most beloved memories of Donald here, so that the family and other loved ones can always see it. You can upload cherished photographs, or share your favorite stories, and can even comment on those shared by others.

Plant a Tree in Memory of Donald
Plant a tree 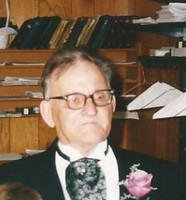