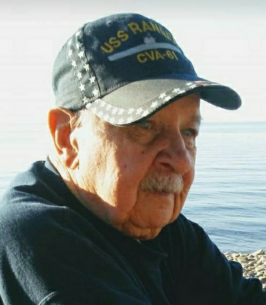 Andrew Carlton “Dew” Butler passed away peacefully on Wed., Aug. 11, 2021, at Seneca Hill Manor Nursing Home in the loving arms of his daughters after a brave battle with Alzheimer’s Disease. Born on August 28th, 1924 to Genevieve and William Butler, Andrew took 96 trips around the sun before soaring off to heaven to be with the love of his life, Gladys.

He was a life long resident of Granby, NY. Dew was a proud U.S. Navy Veteran who served his country during WWII. He ran the Green & White Diner in Fulton between the late 1950’s and early 1970’s and so enjoyed his local patrons. Reminiscing about the ‘dizzy block’ in Fulton was one of his favorite things to do. He retired from the Holiday Inn in Syracuse as the head chef in 1985. He then decided to try something new and took up school bus driving, for fun! The kiddos loved him! He then learned how to run local drivers thru the carwash. That was a hoot. Everyone loved him. He enjoyed horse racing, spending time with his best friends Carl and Deb, and was an avid baseball fan. He loved to garden, bake and spend time with his family, including his three dachshunds. He was the keeper of many animals over the years, including one from next door; a rooster he named Rudy. When the sun began to set, he would take Rudy back home on his scooter for the night. Sure enough, Rudy would be back tomorrow. Dew’s sense of humor will live long and well among every individual he came into contact with, for he was never without a joke to crack or a story to share. His favorite song was ‘Sunshine on my shoulders’ and to lovingly quote the words of John Denver “If I had a tale that I could tell you, I’d tell a tale, sure to make you smile.”

Andrew was predeceased by his loving wife Gladys; his brothers George and John; and sister, Charlotte.

Our Dew will be sorely missed and his memory, forever cherished.

May he rest in heavenly peace.

Donations can be made in lieu of flowers to the Alzheimer’s Association-Central New York Chapter – P.O. Box 12226 Syracuse, NY 13218