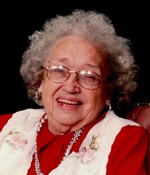 Alberta R. Delano, 99, of Phoenix, NY, went home to her Lord on Monday, November 23, 2020. She was born in Loveland, Colorado to her late parents, Edna (Cox) and Eugene Marchand on April 12, 1921. Alberta was a graduate of Phoenix Central School in 1939 and married Russell G. Delano in 1943. Alberta was a homemaker and a loving and devoted mother and grandmother. Her interests included crocheting, gardening and playing Scrabble and Skip-Bo. Alberta was a Cub Scout Den Mother and Campfire Leader and Charter member the Phoenix VFW, Post 5540 Auxiliary. She was predeceased by her husband of 46 years, Russell G. Delano in 1989; her son Gary L. Delano in 2011; and her son-in-law Steven T. Williams in 2013.

At Alberta’s request there will be no calling hours or services. Burial will be in Phoenix Rural Cemetery, Phoenix, NY. Contributions in her memory to: Paws across Oswego County, 2035 Co. Rt. 1, Oswego, NY 13126. Allanson-Glanville-Tappan Funeral Home, 431 Main St., Phoenix , NY 13135 has care of arrangements.